It’s been four months since the inspiring Awards Ceremony at the Grosvenor House Hotel, during which we awarded the very first CIBSE Building Performance Engineer of the Year Award - today, we Clara Bagenal George.

It is a category that recognises and rewards the contributions of practicing building services engineers to creating and maintaining a sustainable built environment. In its very first year, the Award attracted a host of outstanding finalists making us all at CIBSE feel extremely proud and privileged to represent and work with such dedicated and knowledgeable professionals.

To mark the occasion, we spoke to Clara Bagenal George, the very first CIBSE Building Performance Engineer of the Year Award winner.

Join us for a brief moment to hear directly from Clara and her employer, Elementa Consulting, on why she wants the industry to take responsibility for the impact it has on the wider community and what she wanted us to share with 2020 entrants.

"Clara is humble and unused to the limelight but when you get her talking about her passions, an enthusiastic confidence takes over and it’s not hard to see why she’s widely considered a rising star within the sustainable construction movement. 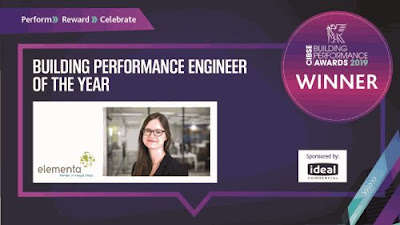 Clara chose building services as a profession, because she believes it is where she can make the biggest difference in reducing our climate change impacts.

She has worked her way up to becoming a Senior Engineer at Elementa by the age of 28, pioneered the foundation of LETI (London Energy Transformation Initiative) and is a regular speaker at industry events all over the world.

She attributes her win, in large part, to the work that she’s been doing with LETI, which has led to her work being further recognised and the fact that the Award platform has helped boost the profile of LETI.:

She finds this really exciting and a little daunting.

“I feel personally a bit awkward about it because I have become a kind of reluctant figurehead of it, but it’s not successful just because of me; it’s successful because a lot of people have put in a lot of effort into it over the past couple of years. Without the support of Elementa and the efforts, and encouragement of  numerous people, both internal and external to Elementa, LETI would have never had the success that it’s had.”


Clara has found that winning the Award has definitely helped provide a bigger voice and wider platform to speak about the issues that are important to her. Being a young female engineer in the construction industry, having the reputation of winning a prestigious award such as the CIBSE Building Performance Engineer of the Year Award, helps gain respect, allowing her ideas to be heard and taken seriously. She often speaks about the importance of considering whole life carbon in building services, not just focusing on carbon output once a building has been built: “it’s important to consider how much carbon went into making the building in the first place”.

Another professional area she’s passionate about, is disclosure. She explains that designers need to understand how the building they designed is performing. Are they performing as intended? If not, why? And asking the question: is the work good enough? Clara wants the industry to take responsibility for the impact they have on the community, the city and the overall environment and how that interacts and affects the people who use it.

Before we say goodbye, she shares her thoughts on the entry process:

“To the entrants for this year’s Awards or even just other Engineers in the industry, if you’re really passionate about making some change or doing something differently, do it. As long as you can outline the potential benefits why it’s important, I would hope that most companies would be like Elementa and be supportive and allow you the freedom to make a change. And so, just go for it!”

View Clara share her advice for 2020 entrants live, in our exclusive video.

How to stand out at CIBSE Building Performance Awards 2020 across all categories?
View our dedicated webinar.

As she walks out of the interview, she adds “I see this really as an Elementa win, it’s just that it’s a personal Award and I find that hard because it’s not usually my style but this is great for LETI, it’s great for Elementa and it’s good for me.”

Enter the CIBSE Building Performance Engineer of the Year Award 2020 for a chance to share Clara Bagenal's well-deserved success.

Entries open. Learn about all 2020 categories and our simplified entry forms, and submit your submission by Friday 13 September. We look forward to receiving it. 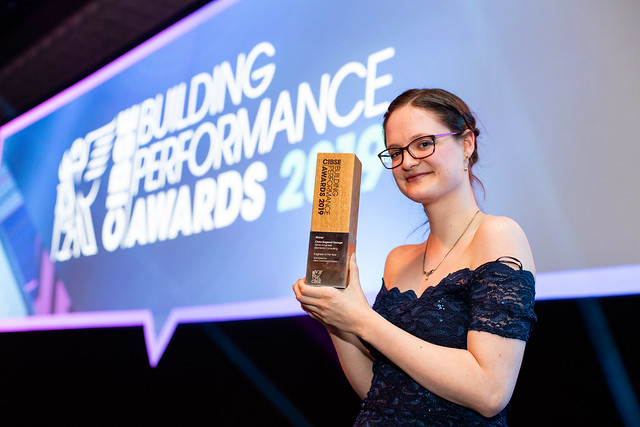