Showing posts from December, 2015
Show All

Heat Networks: A guide to the code 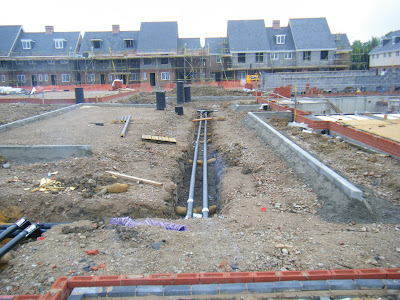 By Ed Palmer, CIBSE Knowledge Editor In a first for CIBSE, we released a Code of Practice on District Heat Networks earlier in the year that sets out what an engineer needs to know about installing and maintaining a heat network. But what is the code for, what is it about, and what is a heat network, anyway? To give us a hand, our Knowledge Editor Ed Palmer has written this handy guide to the code, which covers all this and more! What is a heat network? Heat networks (also known as district heating) supply heat from a central source to consumers, via a network of underground pipes carrying hot water. Heat networks can cover a large area or even an entire city, or be fairly local supplying a small cluster of buildings. Heat networks can be used to supply new buildings and existing buildings ranging from residential dwellings to commercial offices and public buildings. Indeed, a wider mix of building types is generally desirable as this provides a diversity of heat demands a
1 comment
Read more

It's been a big year for the Society of Lighting and Lighting (SLL) and now, as an early Christmas present, we have a bumper blog from its President Liz Peck . Liz looks back on the last year in the run-up to, and start of, her Presidency For me, my presidency effectively began in January. I was mapping out what I wanted to do, what I was going to say during "the speech" in May. By that time, I'd already decided I wouldn't be wearing a suit. I'd sounded out a couple of trusted SLL friends with mixed response, yet I knew I was right: I don't "do" suits. If I could be elected in jeans, I could give my Address in them too. In January, my previous 'stalking' of the RIBA President Elect, Jane Duncan, came to fruition as she joined me and John Aston in Paris for the International Year of Light launch. In February, my personal quest to engage with the RIBA extended locally too as I joined the RIBA Yorkshire Awards judging team
Post a Comment
Read more

By Lee Mullin, Beyond Design Follow Lee on  Twitter ,  Google+  and  LinkedIn Imagine you're in a beautiful sunny Florence in 1503, your name is Leonardo Da Vinci and you're painting the Mona Lisa, a masterpiece that will become one of the most famous paintings in the world. As you've only just started painting you haven't yet decided the exact pose or expression that the famous face will take, but the detail you have put into her smile is stunning and likely to draw the crowds from miles around. Fast forward a year to 1504, and the painting is still under construction. You've been struggling for weeks with the tilt of her head, but finally your eureka moment arrives – you know exactly the angle you should use. Unfortunately, your new plan doesn’t fit with what you’ve created already, so you dig out a new canvas and have to start the painting all over again. 'La Gioconda' by Leonardo Da Vinci Finally, as 1505 arrives, you'
Post a Comment
Read more
More posts