August 05, 2016
The historic vote on 23rd June for the United Kingdom to leave the European Union will have wide ranging consequences. But what might Brexit actually mean when it comes to buildings, energy and the environment? In the first of a series of blogs Dr Hywel Davies, Technical Director of CIBSE, writes on the implications for UK climate change policy.

Whilst much attention was, understandably, directed towards the result of the momentous vote on the 23rd June, much more important for UK climate change legislation was an announcement on the 30th of June, just a week later. On that day the government committed to the emissions reductions targets recommended by the Committee on Climate Change (CCC) for the fifth carbon budget, 2028 – 2032, which sets out to reduce UK greenhouse gas emissions in 2030 by 57% relative to 1990 levels. The CCC has also recently published its 2016 Annual Progress Report to Parliament detailing UK progress in reducing greenhouse gas emissions and meeting carbon budgets.

The Progress Report identifies a gap of approximately 100 MtCO2e between the likely reductions from current plans and the reductions required to achieve the targets set out in the fifth carbon budget.  That gap amounts to half the required reduction from 2015-2032, and will be greater if existing measures do not deliver the anticipated reductions. Any loss of momentum caused by Britain’s exit from the EU will further extend the gap that will exist if these additional measures are not put in place.

So there should be no question of ‘unpicking’ the measures to reduce the UK’s carbon footprint that are already implemented through EU legislation. To meet our targets we need to retain all of the existing legislation, and far more that is yet to be agreed, if we are to stand and chance of delivering a 57% cut. The vast majority of the progress made thus far has been down to cutting carbon emissions on the energy generation side, by investing in renewables, closing polluting coal and oil power stations and using carbon capture and biomass fuels to lessen the impact of remaining fossil fuel generators.

While this is good progress, in order to make up the rest we need to ensure that other areas pull their weight in de-carbonising, particularly the built environment and energy used in buildings. So what could a strategy to make up that shortfall look like?

The CCC Progress Report calls for government to set out its plans to bridge the shortfall in carbon emissions reduction measures by the end of the year, and has set out several areas which it expects this plan to address. These include:

·         Policies to improve the efficiency of new vehicles and increase the uptake of low-emission vehicles;

A number of existing pieces of legislation address energy in the Built Environment: 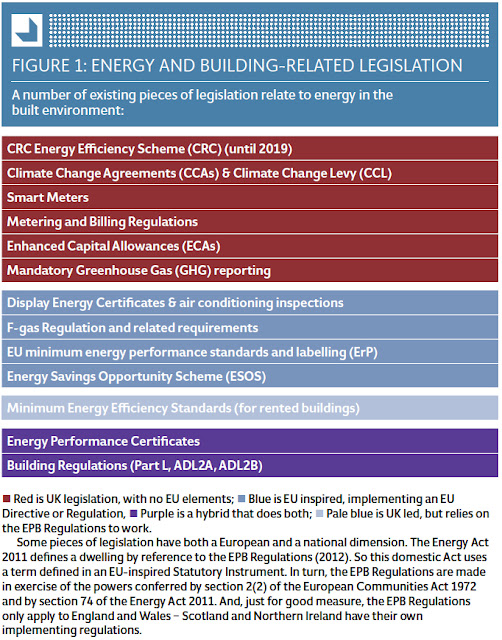 This demonstrates the scale of the challenge facing David Davis and his new “Department of Brexit”. The EPB Regulations and their parent Directive are intertwined into both the Building Regulations and the detailed implementation of the Minimum Energy Efficiency Standards of the Energy Act. Unpicking them will be a major task, if attempted – and the carbon and energy savings will need to be made up elsewhere.

It is clear that unpicking them is the wrong answer for the climate, so there is a strong argument for leaving well alone and incorporating these requirements fully into UK law, or more correctly, into England and Wales law for the EPB Regulations, and English law for the Building Regulations, as other regulations apply in Scotland, Wales and Northern Ireland, another legal complexity of the leaving exercise.

The EU has undoubtedly played a key role in energy management in the built environment, setting targets and legislating to improve energy efficiency in buildings and products. For purely practical reasons it seems unlikely that the UK departure will lead to wholesale changes to existing UK legislation in these areas. However, this is only the start.

As we look ahead to what our departure from the EU might mean for buildings and energy, it is clear that the decisions to be made must take account not only of the need to clarify legal provisions that are based in the European Union, but must also support other aspects of government policy to address climate change and deliver energy security. It will need watching carefully, and we know that there will not be any answers any time soon.
Brexit Building Performance Sustainability